At npm Inc., the term “npm” is pretty overloaded. In addition to being the name of the company, at the very least, it means three bits of software worked on by different teams:

The state of the registry

The current status of the registry is easily summed up as “exponential growth”. You’ve probably seen a picture a lot like this graph before: it always stays the same shape, but the axes keep getting bigger. 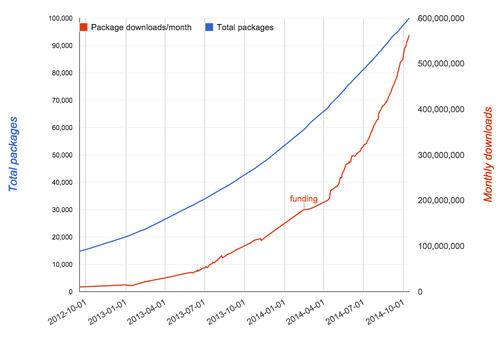 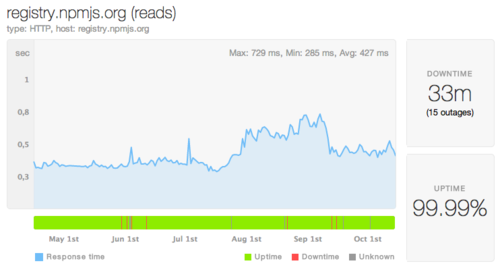 The ever-increasing registry traffic has two distinct user groups: weekday and weekend users, who we can roughly categorize as “professionals” and “hobbyists”. Here’s the hobbyist traffic: 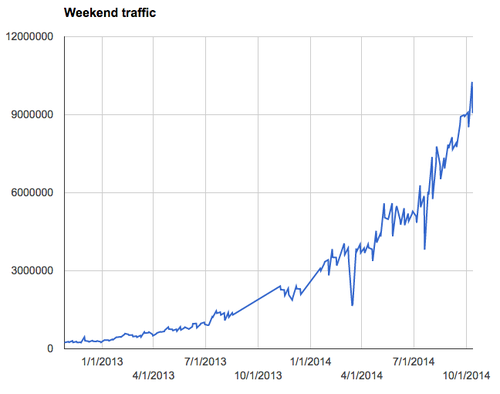 And here’s the professional traffic: 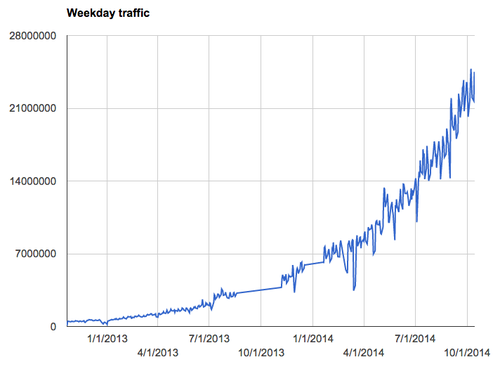 As you can see, both are growing, but the “professional” group is 2-3x as big. This isn’t news to some people, but to others it is: Node.js is a professional tool used by real companies to get stuff done. 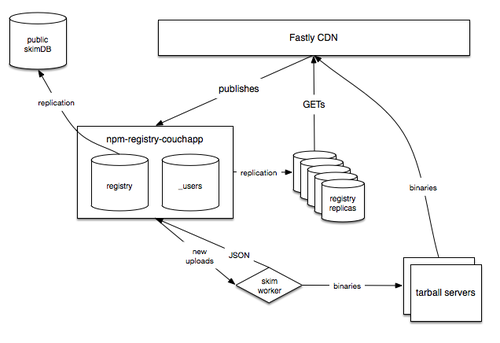 We described the current architecture in some detail back when it was new 8 months ago, so we don’t need to go into a bunch of detail. The key goal of the changes back then was to help us scale, and they worked: registry traffic has tripled since then, and uptime has hugely improved. But the registry still has some major issues, and they all revolve around one thing: the registry is a single giant CouchDB application.

CouchDB is a pretty good database – we love how easily and reliably it replicates, in particular. But it is not meant to be an application platform, certainly not for anything like the scale and complexity of npm. It runs JavaScript – not Node – so the universe of Node modules is, weirdly, not available to the very application that is hosting them all. For this and other reasons, deploying new releases is hard, testing is hard, and writing new queries (which are map-reduce jobs) is very, very hard. 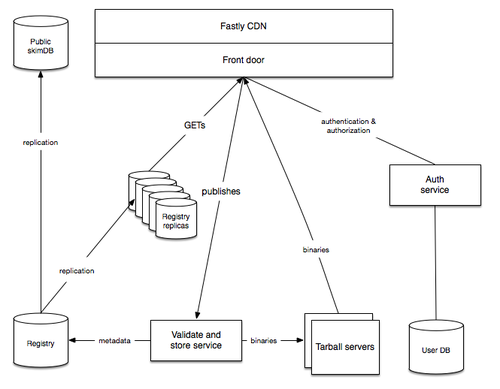 To address all of these, we are shifting to a new, more modular architecture. The changes are simple:

The new components that result from this split are also simple:

We call this collection of changes “Registry 2”. It will resolve some lingering inefficiency in the existing architecture and give us even more room to scale, but more importantly it will allow us to add a bunch of new features. We’re very, very confident that it will work, because it’s already in production: npm Enterprise already uses this architecture, and the Registry 2 project is largely a matter of taking this architecture and scaling it up.

The biggest feature that comes with Registry 2 is scoped packages. Already supported in npm 2.x and npm Enterprise, they work very simply: instead of publishing packages to the global scope (e.g. “express”) you will be able to publish packages underneath a name that belongs to you (e.g. “@myuser/express”). To get more detail about how scoped packages work, you should read the docs about scoped packages on our shiny new documentation site.

In Registry 2, you will be able to publish scoped packages that are also private: only you, or people you designate as collaborators, will be able to see them and install them. Nobody else will even know a package with that name even exists in your scope.

The purpose of private packages is to remove a pain-point most Node developers have encountered: once you get into the “Node way” of building lots of small, single-purpose modules, you want to start doing it all the time, to share code between different parts of your application, or between different parts of your company. But if you write code that is closed-source, or is just too specific to your own application to make a good public module, your options right now are full of friction and split-brain thinking. Why can’t you just npm publish and npm install all the private packages in your app, the same way you can with public packages? People kept asking us to make it possible to do this, so we did.

Private packages will be part of the first release of Registry 2, expected early in 2015. If you would like to try this feature out earlier, you can sign up right here to request access to the beta, which will be available later this year.

Your contact details will only ever be used to notify you about the availability of private modules.

Of course, we know that most people using Node are using it at their day jobs, which means you’ll want to be able to share your packages easily with specific groups of people, and designate different levels of access in a granular way. We’ve already started building how this will work, and it should be released soon after private packages. We think these features together are going to make a huge difference to how easy it is to use Node as part of a team at smaller companies.

We have a lot of fun ideas in mind, but in the interests of this not being too much like vaporware, we’re going to stick to announcing only the things we have firm plans for.